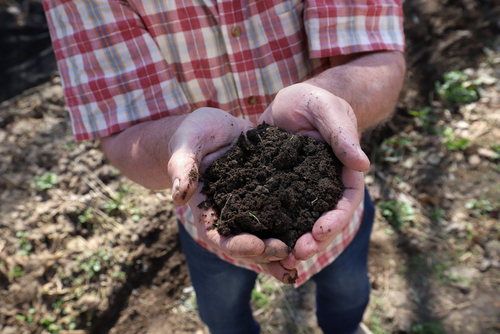 The approach of classical agriculture is based on N, P, K fertilization with strong nitrogen amendments commonly considered as the most important chemical element for crops. Nevertheless, the experts of market gardening on living soil note that if in the forest plant production is abundant and nitrogenous amendments are non-existent, it is because nitrogen comes naturally from elsewhere. Based on this observation, they decided to no longer bring nitrogen to the soil but carbon as it is the case in natural ecosystems.

The supply of large quantities of organic matter with a high C/N ratio creates a hunger for nitrogen in the first few months. However, this disappears and gives way to nitrogen-laden residues over time (up to 200 nitrogen units after 10 years in François Mulet, founder of the national network of market gardening on living soil). The system thus becomes self-fertile: it is the contribution of organic matter that will allow the nitrogenous fertilization of the system.

In trying to understand their system, the market gardeners realized that nitrogen hunger then generates nitrogen fixation.

Nitrogen hunger: what is it?

The soil naturally contains nitrogen available in mineral form. When organic matter with a high C/N ratio is added to the soil, this arrival of carbon will be used by the soil fauna (fungi, bacteria, protozoa, yeasts…) which will multiply massively. Their C/N ratio is 10, which is much lower than the ration brought to them. So they have access to a lot of carbon but very little nitrogen compared to what they need to build up. In order to rebalance these contributions, this pedofauna draws on the stock of nitrogen already present in the soil to the detriment of the plant, which has less energy to do so. The stock of nitrogen in the soil is then no longer large enough to allow the development of the plant that gets stuck. Nothing grows anymore: it is a hunger for nitrogen. It can last up to 5 months. It can be contained by mixing materials with a much lower C/N with the organic input (fresh grass cuttings, poultry manure, plug fertilizers such as guano). 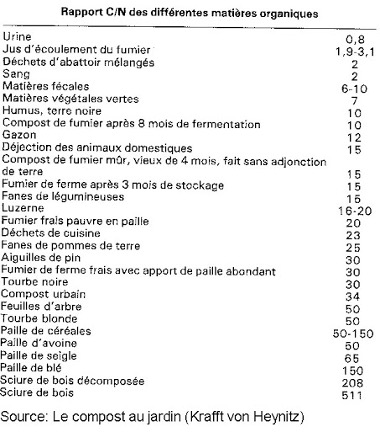 From hunger for nitrogen to its fixation in the soil

After these months of nitrogen starvation, the “organic matter” given at the beginning is degraded by soil microorganisms before being consumed by earthworms. The last phase of mineralization of the organic matter is then carried out and mineral nitrogen is found in the soil. At the same time, the high carbon nutrition of the soil boosts the populations of microorganisms, including atmospheric nitrogen-fixing bacteria, which will also replenish the soil’s stock of mineral nitrogen.

Experiments have thus shown that it is possible to double the initial soil nitrogen rate when high C/N ratio organic matter is added to the soil.

In addition, plant roots are capable of lysing soil microorganisms. These have become very numerous and are reserves of amino acids, an important source of nitrogen. An experiment has shown that in the presence of amino acids, ammonium and nitrates in the medium, plants preferentially absorb amino acids through their roots.

So when the soil “eats” carbon, it produces nitrogen. In nature, plants grow without fertilization because nitrogen is not limiting: it comes mainly from the air and becomes accessible to plants through biological fixation (60%), it also comes from the recycling of organic matter (30%) and rainfall (10%). In agricultural soils the presence of earthworms generates nitrogen: 1.2 tons of earthworms secrete 600 UN/ha.

Some videos to go further: ” Nitrogen at will – hunger for nitrogen and nitrogen fixing bacteria – François MULET “.

Other sources: Article by Maëla PEDEN, “Maraîchage sur sol vivant : A step towards the end of tillage? “March 2016